Our “Design for Industry” university project at Newcastle University has now completed its first stage of the design of our gas valve automation project.

Our team have faced considerable challenges in understanding the internal workings of the gas valve. Through various models and diagrams they have been able to determine the best way to control the valve’s action. 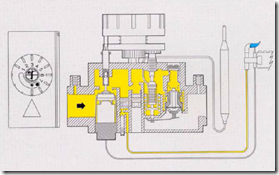 This has been in the form of a servo motor controlled by an Arduino micro computer.

The original brief was to have this Arduino controlled with a bespoke user interface which would reside on a mobile phone as an android / OS app. Unfortunately the Java programming of this was going to take the timescales outside the limits of the project so the team cleverly devised an in-situ programming module using an Arduino add on, a LCD screen, to allow the user to programme servo motor and hence the gas valve.

Our team also investigate the costs of instructing a third party to write the app and to that end they wrote a detailed function specification to describe at the user level how the app would work. We were quoted figures in the region of £5,000 to carry out this piece of work.

The previous years project team were able to carry out various test and experiments with a test rig they built in the labs at Newcastle University. This same rig has been further modified to allow the new devise to operate, tests are schedule to be carried out in late January 15.

We wish our students, Josh, Robbie, Rory, Pablo and Amir all the best for their exams in January and later in the year.