For keen cyclists Paddy and Anabel creating a special room for their bikes was a dream they had when they bought their 1890’s Victorian terrace in Whitley Bay.

Previously they had a yard with a small wooden shed but this was always a security risk and eventually just wasn’t big enough for all the kids and their bikes.

At the same time Paddy and Anabel thought it a good idea to up grade the kitchen and so set about with a designer (John Hindmarsh) to redesign their dining room and kitchen.

John’s novel design required a small amount of steel work to support the staircase and the back wall of the house but allowed a massive area to be opening up linking the kitchen area and the dining room which was really under utilised.

The kitchen was planned to run down the left hand side of the old kitchen with a new island in the middle housing a state of the art Corian sink unit.

This left the utility room (read “Man Cave”) open for all of the washing machines and a new ground floor cloakroom which was needed at the previous under stairs cloakroom space was used as the new kitchen space in the top left corner. This also allowed the boiler to be moved out to the man cave as well.

“Out of the ground” risk

They say that you aren’t free from building risk until you get your building “out of the ground”, in essence this means that until you dig up the ground for the foundations and lay the concrete you can’t be sure you won’t find anything that could delay you or cost you.

At Paddy and Anabel’s we unfortunately found an old Victorian septic tank measuring about 2 x 2 x 1m and full of horrible black sludge. The structure was made from brick and so could be back filled with concrete to form a block of foundation. There were a few other surprises with burried manholes and drains but we quickly overcame these and surfaced from the depths of the ground!

Once we had the boiler moved, walls constructed and roof on we could begin the work of fitting the kitchen. This was supplied by Magnet who have a new, and slightly problematic, modern looking kitchen called Integra. 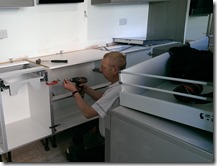 Being a new design concept for Magnet threw up a number of anomalies but these were taken in our stride and the kitchen was fitted in a couple of weeks. The Corian worktops were ordered, measured and fitted shortly after. The integrated sink was complimented by a “pop-up” socket which could be used for charging phones and iPods.
The final product is a great improvement to the rear of the house. We utilised an internal gutter all the way round the property so as to alleviate the need for an overhanging gutter which could get damaged. The valley was lined with a single ply membrane which has a life in excess of 25 years. The Welsh slate set the small extension off as it would have been built in the Victorian age and we fitted a Velux roof light with high security glass and bars to ensure the building was secure.

Paddy and Anabel commented
“We are so pleased with our new kitchen dining area and bike cave. Richard and his team have been professional throughout the process and have gone to great lengths to ensure disruption was minimised. All work has been completed to a high standard with a meticulous attention to detail. However, they do eat a lot of biscuits!”